Is Annulment on the Chopping Block? 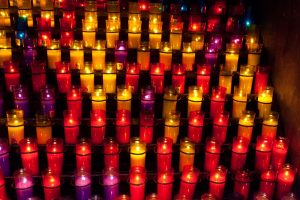 Divorce is on Pope Francis’s mind. The Pope is asking the Catholic Church to reconsider its stance on divorce and be more welcoming to those who have undergone divorce but have not sought an annulment. This is a huge step to the left for the church, which has become increasingly more conservative since the 1970s. If the Pope is able to convince the bishops to do away with the annulment requirement at the synod in October 2015, it could have an astounding impact on single parents who want to be active in the church.

“Once you marry, the bond endures even through the divorce,” says Charles Reid, Jr., Ph.D., J.D., professor of law at the University of St. Thomas in Minneapolis and expert on Vatican policy and canon law. According to Catholic tradition, if you enter into a marriage it is meant to be everlasting, quite literally, “till death do us part.”

Yet, divorce still happens. “Although the Catholic ‘divorce rate’ is lower than the U.S. average, it is still a daunting figure,” said the Center for Applied Research in the Apostolate at Georgetown University. Nearly a third of all Catholic marriages end in divorce. (National Catholic Register, February 22, 2015)

Nora, a divorced mother of two in Phoenix, who asked not to be identified by last name, grew up active in the Catholic Church and was married in the church in 2003. However, due to her then-husband’s drug use and hostile behavior, she chose to seek a divorce. Her divorce was finalized in January 2014, but she is still married in the eyes of the Catholic Church. She did not go through the necessary steps for an annulment, and she has no plans to do so.

“The annulment process is lengthy and expensive,” she said. “You can only be granted an annulment for four main reasons, and my divorce didn’t fall into those parameters.”

Those four overarching reasons, according to Reid, include lack of maturity, psychological defect, intention against children, and intention against permanence. Any reason beyond these general guidelines is not grounds for annulment.

By design, the annulment process can be very involved and lengthy. For starters, the individual must go to a priest and discuss a myriad of uncomfortable issues—personal maturity, premarital sex, psychological issues, alcohol, and contraception, among other issues. “These are tough questions if you’re comfortable with the person on the other side. But if you don’t trust the priest, it’s much more difficult,” says Reid.

If divorced individuals don’t seek an annulment from the church after a legal divorce, they may no longer feel welcome there—especially if they have children. Many parents would like to continue to be active in the church so their children can grow up Catholic. Contrary to popular belief, says Reid, divorced Catholics can continue to receive communion—but only until they enter into a relationship with another adult. At that point, they are committing adultery in the eyes of the church and can no longer fully participate in church activities, leaving them sitting in the pews while their children and the rest of the congregation receive communion.

“I started going to a new church [after my divorce],” Nora says, “but as I started to form friendships, problems arose.” It began when she was asked to be a communion server—something she didn’t have the privilege of taking for herself, because she was in a new relationship and was no longer in a state of grace.

Consequently, divorced adults are choosing to leave Catholicism altogether. Nora finally chose to leave the church and began attending a Christian church. This trend, says Reid, is what Pope Francis would like to change. But it’s a discussion that may or may not go his way.

Conservative Catholics view the issue from a different perspective. Briana Dickerson, a divorced mother of two from a small town near Anchorage, sought an annulment when she became engaged after her 2004 divorce. As a practicing Catholic, she would still seek an annulment, even if the church changes its stance.

“It’s my personal belief– how I was raised to think,” she says. “That’s how God recognizes your status. It’s important to me to feel that my second marriage would be blessed and be seen as an actual marriage in the eyes of God.”

The rate of annulments in the U.S. has decreased drastically in recent years, from 72,000 in 1990 to 24,000 in 2014, according to the Annuarium. Experts like Reid believe this is due to a number of factors—a decline in marriages, as well as an exodus from the church due to divorce.

A change in the church’s stance on divorce would take some of the stigma away and allow divorced parents to continue to be active in the church, regardless of  their personal relationships.

As the leader of the Catholic Church, Pope Francis can make the decision to modify church law. At the synod in October, Francis will broach this topic again, seeking a two-thirds vote to recommend a change in the church’s stance on divorce. As Pope, he doesn’t have to have buy-in from the bishops at the synod, and Reid believes there’s a chance he may change the law without it.

“He is the Pope,” says Reid. “He has the final word. But he’s also a man who loves the church and he’s not going to be the reason the church breaks in two. That said, he holds this issue so dear to his heart, he might risk it anyway.”

I can clap and sing to Disney Diva like it’s my favorite CD. I can even chase my son through a germ-infested jungle gym with ...