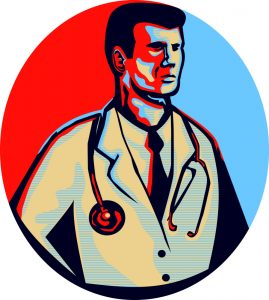 Imagine being home on the weekend, it’s the middle of the night, and your little one is really sick. Maybe it’s the snowing outside, and the last thing you want to do is bundle her up and take her out in the blustery cold. Or, imagine– solo parent that you are– being so ill that you can’t get yourself, not to mention your kids, to the doctor’s office. What if we told you there’s a possibility you don’t have to? What if we said there are doctor’s making house calls? And that you can submit the bills to your insurance for reimbursement?

Crazy, you might say. Doctor’s coming to you instead of you driving to them seems impossible in this day and age. Well, that’s changing, Solo Nation. Doctors making house calls are on the rise. According to Concierge Medicine Today, in order to meet a growing demand, about 12,000 MD’s in the U.S. –almost 5% of all primary care doctors in the nation– have started involving versions of the house call into their practice, and that number is growing.

Dr. Weissbluth of Weissbluth Pediatrics decided to offer house calls to increase further the accessibility of pediatric care for Chicago families. He noted that the service allows doctors to provide an additional layer of support to parents, which has become the core of his practice.

Dr. Weissbluth added, “Our families love this service… they enjoy knowing their child is comfortable at home and receiving the same high-quality pediatric care [he or she] would in an office setting. Doctor visits are more convenient for families if the provider does the traveling for them. It reduces the risk of exposing an already potentially sick child to other children,” he said. “Working parents do not have to worry about a nanny, family member, or other guardian traveling to the office.” Weissbluth Pediatrics has been offering house calls to its parents for sick and well visits since September of 2014.

“Your child gets sent home from school sick. After navigating the doctor’s automatic phone system, you finally secure an appointment for the following day,” Gettleman said. “That morning, after calling in sick to your work, you pile the kids in the car, battle traffic to get to the doctor’s office on time. You park, drag the kids, diaper bags and snacks inside. You are handed a stack of papers resembling a small metropolitan phone book and are asked to read and fill out forms. As you give the receptionist a nervous glance, she says, don’t worry, you’ll have time. The doctor is running an hour behind.”

He went on to add, “Sitting in the waiting room, you notice that the coughing from around the room sounds eerily like dogs barking to the tune of Jingle Bells. Finally, your daughter’s name is called. In the exam room, you let out a small sigh of relief. Half an eternity later, the doctor graces you with her presence. Seven and a half minutes later you’re back in the car with a prescription, off to find a pharmacy.”

This is not exactly the way parents would like to see medical care unfold. Dr. Gettleman started daydreaming about building his practice from scratch.

Instead of being open from 9-5 when school and work are in session, hours would be in the early morning and the evenings. He added hours on the weekends and holiday’s understanding families, and single parents have busy schedules.

He knew having a practice close by would be good, but your house would be even better. You wouldn’t have to travel, suffer strangers coughing at you and no more hauling a car full of siblings across town.

“I would not cram sick kids together to exchange germs as they wait to be seen. I’d use modern technology to make things easier while still keeping the medical care top notch. In the same way most of us communicate today, I’d use more e-mail for things like rashes, and video conferences for face to face conversations that don’t need hands on examination. If a mom can take a picture of her child’s rash on her smartphone, download it to me and get a response all within 15 minutes, I’d say we were utilizing technology properly.”

“My central goal for the practice was to reestablish the close relationship families used to have with their doctors while also using today’s modern technology to make our lives easier.” Dr. Goofy Gettwell is located in Arizona.

Amy Baxton MD said, “In a very demographically mixed neighborhood, I have ALWAYS done house calls. I’ve looked at texted pictures [recently a neighbor’s child texted a picture of a rash on her arm.] Wanting to help is why I went into medicine, as did many, many of my colleagues. One of the happiest moments is to be able to say, ‘I know what this is. You don’t need to go to the emergency room.’ When they need a prescription, we involve their primary care.”

“People are selected to go into medical school in part based on the sincerity of their desire to help people,” Dr. Baxton concluded. “It’s not surprising that many of us take joy in helping our neighbors, friends, family, and friends of neighbors and family. It’s why we went into this business in the first place.”

Tina O'Reilly is a freelancer with over 15 years experience. She resides in Rhode Island with her family. She loves hanging out at the ocean. You can find her at www.tinamoreilly.com

The Solo Parent Guide to Using EBT, WIC and Other Resources

It’s no lie. Being a solo parent is expensive. Solo parents who are living on a single income are more likely to have trouble making ...