How To Talk To Your Kids About Divorce 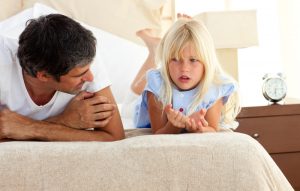 When it’s time to tell your kids that you are getting a divorce, here’s what you need to know:

Vikki Stark, family therapist and author of Divorce: How to Tell the Kids, notes there are different ways you can tell your child about the divorce—synchronized, in tandem or solo. Ideally, you and your spouse will tell your child together, as a synchronized parental unit. However, this isn’t always the best approach.

“Kids are perceptive at picking up on their parents’ anxiety. The parents’ emotional state will impact kids at some level,” says  Pete Stavinoha, Ph.D., Director of Pediatric Neuropsychology at the Center for Pediatric Psychiatry at Children’s Medical Center of Dallas.

Stark agrees. “If the level of tension between the parents is unbearably high and there is a risk that the telling may deteriorate into sarcasm, sobbing, blaming or, God forbid, a screaming fight, it’s better to cushion the kids from this distressing scene by telling them in tandem.” This means that each parent talks to the child individually; one parent talks to the child alone, then the other does the same.

If circumstances warrant that you cannot be with the other parent when you tell your kids about the separation, choose a time when you are calm and your children are calm. Then you can spend time together and open up conversation.

When you’re talking to your kids about a major life change, it’s best to have made most of the decisions ahead of time. This will help ease transitions and reduce anxiety for your children.

“The more the telling takes place in an atmosphere of calm and order, the better it is for your child. So, if the parent who is moving out has found a new apartment and knows when he or she will be moving, and if the decision has been made regarding how often the child will be living with each parent, the more likely it is that he will feel secure and less anxious about all the changes to come,” says Stark.

“Kids will have some anxiety about what’s going to happen to them. They have a self-centered approach, and parents need to anticipate this. Their perception will be based on experiences that friends or relatives have had,” says Stavinoha. So if a friend of your child’s has seen a nasty divorce, your child may feel anxious that your divorce will be nasty too.

“It evokes a fear in the child that, ‘I’ll never see Dad again,’ or ‘My parents will always be fighting,’ or ‘I’ll be going back and forth every week,’” says Stavinoha. “They will fill in the blanks with what peers have gone through.” The more ready you are with answers to their questions, the less their imaginations will take over.

Do not have this conversation before bed or a separation (such as going to school or camp), as this might increase anxiety levels and fear. The best scenario is for the parents to initiate the conversation together, and to do so when the family unit can remain together for a period of time. This way, when questions come up they can be answered by both parents. After the initial conversation, head to a park for a quiet afternoon, or hang out as a family at home.

To help ease into the initial conversation, Stark developed a seven-step process for breaking the new news of a divorce to children, starting with assessing your feelings and getting on the same page as your spouse. 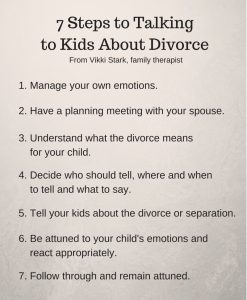 Many children may be oblivious to the fragile state of a marriage. If you and your spouse avoid fighting in front of your children, or a singular event (such as an affair) has spurred a divorce quickly, it may not be best to suddenly announce a divorce to your children. They will likely feel blindsided and confused, and unable to take in much more information.

“Open up a conversation before you start to say you’re separating or getting divorced. Ease into the discussion and test the waters,” says Stark

She suggests opening up the idea that things haven’t been great between Mom and Dad and then asking the child what he or she has noticed or thinks about this. “This gives the child more of a sense of agency.”

Most importantly, know that your initial conversation about divorce with your child won’t be the last.

“One thing I think gets ignored is that parents treat this as a one-time conversation. With any stressful situation, kids continue to think and worry and that will evolve over time. Parents need to be aware of that and be open to listening to kids and have a willingness to talk about it and keep talking about it in the future,” says Stavinoha.

Thus, the final step in Stark’s process is about following through and staying attuned, with parents revisiting the child’s thoughts and feelings as they evolve over time.

It’s common for children to think they are the reason behind the divorce, especially if they’ve witnessed their parents arguing about them or their behavior. Even if that’s the case, it’s very rarely the reason, and children need to be reminded of this. A lot.

“Reassure them that they’re not the reason for the divorce. It’s about Mommy and Daddy’s relationship,” says Stavinoha. “Directly state that it’s not because of you or what you’ve done or haven’t done.”

It’s not necessary to tell the child the real reason for the divorce, since such complex concepts are too much for children’s brains to be able to properly process. It’s a balancing act, according to Stark.

“Kids want honesty but they don’t want parents to badmouth one another,” says Stark. “Instead, tell them that you feel differently about one another and we realized that as much as we don’t like it, we just can’t be together anymore.”

Talking to your children about your divorce can be one of the most difficult experiences you’ll ever have, but remember—you’re not reinventing the wheel. Chances are, you’ve got friends who’ve gone through this who’d be happy to share their experiences. Lean on them now.

Be patient—and most of all compassionate—with your kids. That’s what they need from you most, after all.

5 Essentials to Thriving as a Single Parent

By Zoe Kors – republished from Elephant Journal As a single working mother, I am very familiar with feeling pulled in several directions at once. ...