Longing for a Father 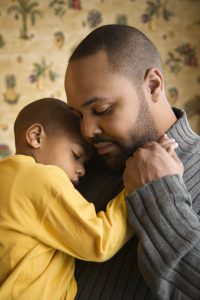 Until I got married and had a son, Father’s Day had been a horrible day for me. Before then I’d never really understood the love between a father and his children. I was raised by my paternal grandmother because my father was a drug dealer and addict. I never expected anything from him, nor did I miss him when he wasn’t around. My father had two other older children, sons, with a former girlfriend who had taken the boys to New York. He never saw them again, and I remember the sadness in his eyes and the times he cried to me because he didn’t know them.

Fast forward twenty years, my husband and I are divorcing, and I’m angry. I was tempted, like a number of women I knew, to take my child and run far away, or to make it difficult or impossible for my ex to spend time with our son. That, I thought, would a suitable punishment for my ex-husband. Not because he deserved to be punished but because I was struggling to deal with my anger and acting out seemed like the thing to do. I wanted him to hurt the way I was hurting. But my own father’s tears over the loss of his boys haunted me, and I couldn’t live with myself for causing so much pain to another person, my son’s father. Plus, I had the experience of watching my parents destroy one another, and I knew that what occurs between two dysfunctional angry adults has nothing to do with the children that come from the union. It’s heartbreaking to me that such confusion between adults sometimes results in absentee parenting.

My son’s father and I are no longer together, and I wish I had a dollar for every time someone asked me, “Is his father in his life?” I might not be rich, but I’d certainly be debt-free. There’s a longstanding assumption that black dads are not in the lives of their children. The thought is so pervasive that even black men who are in their children’s lives, ask me “Is his father around?” I’m often annoyed by this question and I always answer. “Of course.” My son’s father is the best dad I’ve ever known. He is present, helpful, available, loving, and protective of our son and the community that supports him. I’m lucky, I know, people tell me all the time how lucky I am that he’s around. And when I hear this I just shake my head yes, but in truth I know I’m not lucky; I’m smart and humble. I knew my son needed his father, as did I. Preventing or complicating their relationship would further to deepen the familial handicap. My son’s father had never known his father. I realized that I was being given a chance to transform the patterns and choices of the generations that had preceded us.

When it came to creating and nurturing a space for my ex-husband to be in our son’s life, it was a choice. We were not so mature and evolved that we automatically came together gracefully after an abrupt breakup. Knowing what my grandmother had endured as a single parent to six children, what my father endured as a man who’d lost his boys, and what I had endured as a child of sadly absent and lost parents, I chose to seek peace with my ex. As angry as I was, I made sure to do my inner work in order to remain on good terms with him, and I made his son available to him whenever he wanted him, which was often. At one point he was coming to my house daily for dinner and bath time. After a year of this I insisted that we make a different arrangement–I needed him out of my space. And while my love life suffered, my son knew his dad. He felt loved, and he flourished.

After many years of therapy I discovered that my unhealed relationship with my own father was the greatest barrier to harmony with my ex. Because of my judgments of my father, I did not trust or respect men. And yet my self-esteem and confidence was derived almost exclusively from their approval. I acted out my pain with helpless men who had no idea what they were dealing with in me. Many women who missed having a present and loving father, often carry deep seated pain and un-forgiveness toward their fathers. It’s not uncommon to have those shadow feelings control our current adult romantic relationships. My marriage acted as a mirror for all my unworthiness and self-loathing. No one could fix me or save me, except myself.

As a result of the struggles I had within myself attempting to co-parent and to preserve my relationship with my son’s father, I created The Father Project. This project is a twenty-one-day practice to foster healing with the participant’s father. This work creates a container for participants to loving face the pains and disappointments they endured as a child or young adult that act as phantoms in their present day experience. My intention is to facilitate the healing of participants’ broken hearts, and to help them protect their children from inheriting their pain.

As Father’s Day approaches this year, I’m happy to say that I seemed to have found the path to peace with my son’s father. As a young adult I feared being a single mother and not having a father around to help. Even though our relationship ended, our parenting is flourishing. The benefit is my son has two parents who love him and work together on his behalf for his happiness. We are conscious of our behavior and the impact we have on one another and our son. When we make mistakes, we apologize and start again. Peaceful co-parenting is a choice that allows us to care for our children and sometime nurture our inner child within that may have missed out on the love of two parents.

Monique Ruffin - Author, activist, life coach, and mother, Monique has dedicated her life to living and teaching that we will change the world with a spiritual approach to all of life's experiences. Raised in Los Angeles by her grandmother, Ruffin was the child of drug-addicted, often imprisoned parents. This challenge, along with her grandmother’s life-saving love and guidance, serve as her activism’s foundation and inspiration.

Episode 4: Making It Work as a Single Mom with Jo Marie Scaglia

This single mom works hard to run three successful restaurants and everybody loves her – especially her daughter!  How does she do it? In this ...