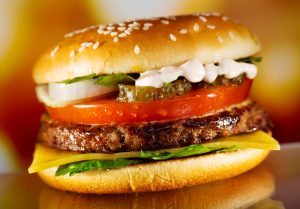 On Tuesdays, Connor has Art Club after school. Then after that, all three boys have Parkour class (and whatever you do, do NOT call it gymnastics class because it’s not, okay? It’s totally different than gymnastics). We have this teeny tiny window of 45 minutes to pick him up, get food down all three of their throats, and get everyone to the gym across the river in time to change and warm up. This is about as easy as getting Apollo 13 back to Earth. Yesterday was no different. Plus I was running 15 minutes late.

Taylor had been sick from school but well enough for Parkour—funny how that happens. Noah was upset because I was late, and Connor was starving to DEATH and why couldn’t we just run home really quick to get some food? Pleeease?  I always think that I’m going to plan ahead for Tuesdays and pack a healthy snack for them before gymnast… I mean Parkour. I picture Bento Boxes with fruit arranged like a flower or a robot, miniature carrots with a homemade dipping sauce made with something like Tahini, organic lunch meat with goat cheese. Of course my kids would never actually EAT any of that, but it would make me feel so clean and good. I think of Pinterest and how everything in my life is the exact OPPOSITE of something you’d see on Pinterest. I eye the floorboard of my car and see gum wrappers, stickers from the pediatrician that we saw before Christmas, someone’s homework that never made it in the house, a sock. I think about how brightly colored shelves, or cubbies, or hooks, or crates might change my life forever and ever. I long for order.

Five minutes later and they’re all whining “We’re huuuungry MOM!” in various pitches of pitiful from the backseat– ugh. We hadn’t even made it to the bridge. Growing boys can be scary when they aren’t fed. I’ve witnessed this many times, and many times I’ve feared for my safety.

So I pulled into a drive-through.  I won’t tell you which one, because you’d be horrified, but suffice to say that pink slime, ampicillin, and e-coli were ALL on the menu. We indulged in all three, and it was freaking delicious. Suck it, Pinterest. This was a matter of self-defense. At gymnastics we had five minutes to eat this foodstuff that I’m positive was cheaper than the packaging it came in. It was absolutely no problem, since it seemed no one had eaten since 2012.

Whenever anyone messes up an order in our family, it’s always Connor’s order, and that’s probably best, because he is the best natured of any of us. He always says things like “Oh, that’s okay, they were probably just busy”. Or, “No mom! Don’t complain, please?  I’ll just eat this garden salad with no dressing.” He’s either very sweet, or terrified that I’m going to embarrass him. So this time he got the “girl’s toy” in his “boy’s meal.”  He pulled it out, examined it with a confused look on his face, and then quietly said “Mom…look.”  It was a light pink stuffed heart that had “LOVE” stitched on it in lime green. It looked like a carnival prize. There was a card attached so that you can write T0: and FROM: on it, so you could give it to someone for Valentine’s Day. At first, I was about to do what I normally do, which is go into a whole exaggerated act about the “injustice” of all of this. “How DARE they give you the wrong TOY? We oughta call the restaurant. No wait!  No… let’s call headquarters. Let’s talk to the CEO!  Let’s get that place SHUT DOWN forevvvveeer!” It snaps them out of their disappointment, and makes everyone laugh.  But then I remembered Noelle, a girl that Connor had a baby-crush on in class. I stopped and gave him a knowing look. He understood and whispered, “Noelle?” And I said, “Yeah.” He looked back at the heart, then at me, and said “No. I’d rather give it to you.”

Suddenly all of the oxygen was sucked out of the room. Time stood still. I could hear the pat-pat of the ketchup dripping off of his french fry. I felt like I was floating. At that moment, this child could have asked me for anything, anything in the entire world. “Mom, can I go to space camp next month?”  “Of course you can, baby. I will work six nights a week for the rest of my life so that you can go to space camp every year.” “Mom, I know I won’t be old enough to drive for seven years, but can we get a Porsche 911 just so I can look at it in the driveway until I get my license?”  “Of course we can, chicken beak. I’ll take out a second mortgage on the house today.”

He’d rather give it to ME?  Crazy-ass, drive-thru, crabby, late, non-Pinterest mom? I looked at his hands, which were halfway between a kid’s hand and a teenager’s hand.  I could still see the tiniest bit of pudginess in his fingers, but they were also getting long and would soon be slender. I floated over to him, bent over and smelled his hair (which was matted) and gave him a kiss on his head and reached in to hug him when he jerked away and yelled “Mom! Get off me! Jeez!” There were other kids around, and I had totally embarrassed him, but I didn’t care. His brother started cracking up. Connor’s face got red.

Their Parkour coach promptly walked in and said “Let’s go!” and clapped his hands. They ran out of the room and into the gym, leaving behind boxes, wrappers, straws, cups, half eaten e-coli sandwiches– and in the middle, one stuffed pink heart that said “LOVE.” I wanted to take a picture of the mess and post it on Pinterest, but I couldn’t find my phone.

Suzie White is a freelance writer, solo mom of three raucous boys, a postpartum nurse and lactation consultant, who lives by the skin of her teeth in Little Rock, Arkansas.

Do a quick Google search for deal-breakers you’ll find lots of smart things to keep in mind while dating. Most common deal-breakers revolve around children, ...