The Mouse in My House 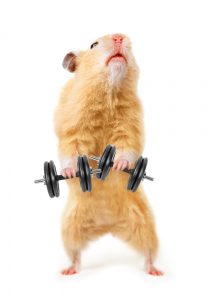 We own four cats—all hunters who, despite the bell on their collars, regularly bring us catches from the canyon behind our house:  mice, rats, birds, lizards, even an occasional baby rabbit and King snake. As early as six-years old, my kids became adept at either rescuing a still-live animal from the cat’s mouth (which they’d release back into the canyon), or putting a plastic bag over their hand to dispose of the ones that didn’t make it.

So you can imagine our surprise to discover that we have a mouse who has taken up residence in our house. We’ve never actually seen this mouse, but we know he’s here somewhere. Our theory is one of the cats brought him in through the cat door when we were gone, realized there was no one here to see his prize – then either lost interest or lost hold of the mouse. We’ve named him Supermouse, which seems fitting for a rodent who has successfully evaded four cats for three months.

We first discovered his presence in late January when we returned from a weekend away. My son had a bag of chocolate coins in his room. We found the net bag torn open, gold foil and bits of chocolate all over his desk, and a trail of mouse poop on the floor. Quite a lot of mouse poop in fact. He’d clearly had a feast in our absence.

Next he moved to the kitchen and for weeks we found bits of food and droppings behind various appliances and shelves—first behind the microwave, then the toaster oven, then the phone and stack of papers, eventually under the cereal shelf, and it continued along these lines week after week. At first we were horrified, then became gradually desensitized…to the point that we now just wipe it up, disinfect the area, and carry on with whatever we were doing before we discovered the mess.

I have become quite philosophical about this mouse, not caring whether he stays… in part because life is just too busy to worry about a mouse, and partly because his presence has reminded me of something my mom said to me years ago. My mother, who is a deeply spiritual person of no specific denomination, explained God to me like this, when I was growing up:

I would ask: “Mom, how do you know there is a God? What makes you believe as strongly as you do that there’s a higher power out there?”

She would say: “Alison, it’s like having a mouse in your house. You will never actually see it, but you will know it’s there because the cheese keeps disappearing. God gives you little clues that He is there. I’ve had it happen time and time again in my life. At times when I needed guidance or inspiration, when I needed something or someone to come along and provide friendship or support or love, at my lowest times, when my mother died, when I was going through my divorce, when I was worried about one of my children or the future – the cheese would go missing – something would happen that was just too much to be coincidence, little clues that God was out there and I should have faith. Sometimes it would be a friend showing up or a person coming into my life right when I needed them. Sometimes it was an act of kindness. Sometimes it was a book or cassette tape I found at just the right moment with the wisdom I needed. Sometimes it was a random conversation with a stranger, or discovering an old card or letter that had something written on it that could have been intended for my current situation. There was always a clue when I most needed it. “

Childhood was so carefree for me that I didn’t really understand my mother’s message until I entered adulthood and began life outside of my mother’s house. I started to look for the missing cheese during times of sadness or when I was unsure or challenged by life.

I’ve been fortunate to have relatively few crises in my life, but what I’ve realized is we all have unavoidable struggles and changes that are just a part of living through each stage of life. Marriages and relationships end, people we love die, we lose friends through locational changes and life circumstances, our children grow up and leave the nest one day. Life is a mixed bag for everyone. Love, joy, heartbreak, loss.

Through my dark nights of the soul over the past thirty years, the pattern has been the same. I would feel more and more lost and start to wonder if I’d been kidding myself all along and there’s nothing out there. And then something would happen— the cheese would disappear. I’d get a clue, sometimes large, sometimes small, just like my mother described, which would carry me spiritually and give me the strength I needed to regain my inner footing.

This has been a particularly hard couple of months for me. I’ve been waiting for a message, a clue that everything will be okay. It finally smacked me in the face today—there couldn’t be a clearer message than my mouse in the house. How could I have missed it? –this literal reminder of my mother’s unswerving faith in life and God.

This mouse gives me the most hope of all. It has evaded the cats, defied all odds, and has been leaving me clues—mostly in the form of shit. So I just have to laugh and see the incredible irony in it all. I’ve got some shit in my life right now, that’s for sure. And it’s quite clear that God is telling me through all this shit—big and small –to keep the faith.

(P.S.  I am leaving the patio doors open so Supermouse can make a run for it.)

Alison Patton is a licensed attorney and mediator who works with divorcing couples throughout California to address their legal, emotional and financial issues during divorce. Her specialty is providing mediation and comprehensive legal services for couples whose goal is to get through the divorce process affordably and without setting foot in court. She writes as “The Divorce Doc” on her blog, LemonadeDivorce.com.In her spare time, Alison runs a local granola business with her family. She lives in California in a cozy and crowded little house with her husband, two children and a menagerie of pets.

Kids get hungry – a lot. Parents have got the task of figuring out what to cook, what to buy, and then doing the actual ...