The Rise of the Devoted Dad 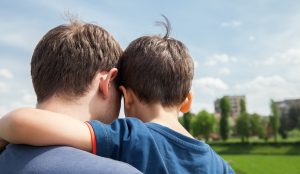 For years, divorced dads were characterized largely as absentee parents, narcissistic deadbeats who skipped out on child-support payments, or both. But as cultural mores changed and men’s roles have evolved, the father’s-rights movement has gained traction with the help of nonprofit groups. The collective goal: to help devoted dads obtain their fair share of custody, and in some cases, child support.

Historically speaking, the so-called Reagan Revolution “completely liberalized divorce” to a point where fathers are usually on the losing end of legal judgments, according to Patrick McCabe, co-chair of the Fatherhood Coalition in Boston. Ironically, fathers began deepening their parental involvement around that time.

As the father’s-rights movement grew, a role-reversal began to take shape for both parents. Men discovered the rewards of being nurturers, while more women entered the workforce, observes Steve Ashley, founder of the Divorced Father’s Network, which is based in San Jose, Calif.

“There was a time when the men’s movement was all about men bonding with men,” he says. “As the women’s movement evolved and more women started focusing on careers, and wanted to give up the role as nurturer and do more in the workforce, there was a vacuum that fathers started filling. There were more men who were doing more parenting at that point, and struggling to give up the old idea of being the breadwinner and leaving the nurturing to women.”

There’s a tremendous need for more resources for solo households headed by fathers, Ashley notes. “Stay-at-home dads and involved fathers have a very positive impact on children’s academic achievements,” he says. Another obstacle for the father’s rights movement is that men often view other men as competitors or threats, and therefore, don’t work as well together.

The most important message that can possibly be conveyed to solo dads is that mothers and fathers contribute equally to their children’s development, according to Armin Brott, an author of six best-selling books on fatherhood who Time magazine described as “the superdad’s superdad.” He says keeping kids away from a parent, unless they’re in harm’s way, does a disservice to both the children and uninvolved parent, whose health and well-being will be adversely affected.

But if there’s serious concern about one of the parents’ roles, then Brott says there has to be a clear line drawn in the sand. “Health and safety issues are non-negotiable, and if you really feel that you child is in danger in some way, and you’re not just making a false accusation of abuse, then you need to take the steps that you can to get the other parent away,” he says. One outcome is supervised visitation, which may be court-ordered.

Legal advocacy is a crucial role that father’s rights groups provide. “We’re trying to change the way families are being treated in family court,” says McCabe of the Fatherhood Coalition. “But we’re not really just about fathers’ rights; we’re about everyone’s rights.” McCabe’s group doesn’t give legal advice, but it does track how solo parents are treated and lets solo parents know what to expect in family court, as well as clarify their legal rights.

Unwed fathers also have rights that are not being addressed, according to McCabe. He feels that the delineation of these rights is unclear in his home state of Massachusetts, where he also characterizes the family court treatment of divorced dads as brutal. He asserts that a first hearing is often unfair, lasts about 15 minutes and “someone is usually thrown out the door.”

Mike Weening, a father’s-rights legal advocate and political activist who heads up Father’s Rights California, personally relates to this topic. His essay, “Why Men Lose in Family Court,” chronicled painful lessons learned from his own divorce. To wit: a desire to be on friendly terms with his ex-wife for the sake of their three children trumped any hope for “an equitable division of property, custody, visitation and a support order.”

Weening became an attorney in the early 1990s. At that time, he recalls how most dads were given just one weekend a month to see their kids. “We’ve come a long way since then,” he adds.

His involvement in the father’s-rights movement began with the San Bernardino, Calif., chapter of the Coalition of Parent Support, which was instrumental in passing key legislation. One such effort, known as the New Spouse Income Bill, “became life-changing for millions of men around the state of California [in] that their new spouse’s income could not be used to calculate or figure into child support calculations,” he explains.  He credits California with helping jump-start the father’s-rights movement and encouraging similar legislation in other states across the U.S.

With the help of LexisNexis, which offers computer-assisted legal research, Weening says it’s now easy to compare family law statutes in all 50 states. While the system may appear to casual observers as a patchwork of state laws with regional disparities, he sees tremendous uniformity. “Much of family law today is regulated by the federal government,” he explains, citing the Child Support Enforcement Act, Child Support Recovery Act, Welfare Reform Act and Uniform Child Custody Jurisdiction Act. “You wouldn’t find a 5% variation from New York to California.”

The uphill battle has left scars on devoted dads over the years. McCabe believes progress is being made thanks to the hard work of advocacy groups and that family courts are finally acknowledging a phenomenon that has been in place for at least 30 years, which is that “fathers are good fathers.”

When he started the Divorced Fathers Network 30 years ago, Ashley was going through a divorce and began comparing notes with other men who were in similar situations. He has seen 300 to 400 father’s-rights groups spring up during that time, motivated by a sense of unfairness to fathers. Acquiring new skills to improve one’s family situation is the emphasis. “We’re not an angry men’s group,” he exclaims. “We’re a group of fathers going through a difficult time who learn from each other.”

For more information on resources to support dads, click here.

Bruce Shutan is a versatile Los Angeles freelance writer who has written for more than 100 publications or corporate entities over the past 15 years and recently began ghostwriting self-published books. His extensive reporting on the American workplace dates back to 1985, with a showbiz sideline developed in 2000. His website is www.bruceshutan.com

Today, two worlds collide.  In my day job I work as a reviewer for Common Sense Media, an organization that helps families make decisions about ...