Try This: the Ikea Date 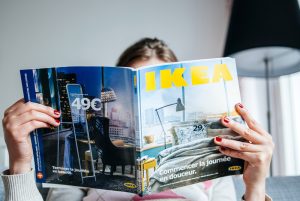 Have you ever assembled a piece of furniture from Ikea? It looks easy enough.The relaxed smiles in the catalog suggest that those clever Swedes do it in their sleep. All the time. It’s minimalist furniture, after all! The cartooony instructions that come with the purchase seem to say, it’s so easy, even a caveman could do it.

Don’t fool yourself, solo parents. It’s nothing short of hell in a cardboard box.

However, assembling furniture is nothing compared to parenting, which is why I want to suggest that you skip a romantic rendez-vous and find out whether or not your love interest is a person you work well with.

Dinner and a movie can be a nice break in the battle, but that will not show you how this person might react on a day when the school principal calls to say that your 4th grader attempted to run away at recess, and the sixteen year old’s car broke down, oh, and the preschooler has a fever—on that day, you need to know how your partner ticks.

Hence, the Ikea Test. Go to Ikea, pick out a piece of furniture and assemble it together. There are other options, which I’ll discuss later, but let’s start with the blue store with the yellow letters. Apparently, a professor of psychology named Ramani Durvasula, of California State University in Los Angeles, dubbed one Ikea entertainment center the “divorce maker,” because of the lengthy instructions, number of pieces, and the fact that it takes two people who communicate very well to assemble it.

With this in mind, a guy I had just started dating and I decided to tempt fate on our second date. We both wanted to know whether the person we were becoming increasingly attracted to could handle real life. I learned more in this Ikea date than in nine months of dating other guys.

My date had just purchased a new home, and was in need of an entertainment stand. Although he’d been to Ikea before, I’m pretty sure he was concerned that I was a slow-walking browser, and that he was going to be stuck in the store for hours. He was fortunate that on that particular day I was marching to his driven beat. (Oh, I’ve been married before—I know that only girlfriends can manage hours at Ikea.)

We found the TV stands, and I gave my two cents on each of the options, while he honed in on two. He took my thoughts into consideration and made a quick decision. After the choice was made, and a Swedish breakfast was consumed, we headed back to his place to let the real test begin.

As we opened the box, I was mindful of how this would have gone down in my marriage. I would have cheered my ex on and then left the room feeling like my only contribution was in picking out the furniture. Now, there might not be anything wrong with that, but going forward, I wanted to be in relationship with someone I worked equally with, not someone I worshiped. Topping my concerns were whether he would be bossy, quick tempered, or if he’d take control. He (also a solo parent) was wondering if I was going to be critical, pushy or complacent.

I could tell you that it was a horrible disaster, because that would make for an interesting story. But it was a delight. I was surprised to find out that we worked really well together. I found out that he’s pretty smart, laid back, not easily flustered– and he eagerly accepted my help. At one point I realized that he’d gotten a part on backwards and, after I pointed out the mistake, he responded with humor. He found out that I could be assertive and helpful without being pushy or critical. And as we’re both introverts, we reveled in completing the task with spans of comfortable silence in the process.

Working well together once is not a green light for marriage. It takes consistency to find out whether or not two people truly work well together. The opportunities are plentiful: try replacing an appliance with your date, painting a room–just about any home improvement project will do. Or heck, clean the garage, take a cooking class, go canoeing, volunteering, or any task that requires that you work as a team. And when you suggest these activities as a date, let your partner in on the goal by simply stating that you want to see how well you work together.

So, why not mix a little real life complexity into your dating life? Of course, physical attraction and romance should be center stage for a period of time. But at some point, real life is gonna kick in. Make sure the two of you can tackle it together– with minimal instruction and lots of random pieces.

Sommer is a blogger at www.LetGoBeTrue.com. She also works behind the scenes assisting other bloggers. She is a solo parent to three boys, ages 10 yrs. and under. And if that wasn't enough, she's following her passion by furthering her education in Health Psychology.

D is for Drums

My home office is supposed to be a master bedroom, so it has the best closet in the house. When [we] were moving in, I ...