Being the Third Wheel Doesn’t Have to Be a Drag 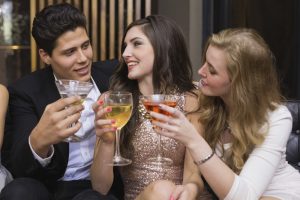 I’ve been solo for two years. My best friend has spent the better part of that time in relationships, and the rest of my friends are married. Hanging out with couples hasn’t gotten any easier, despite all of my practice. Though I respect the fact that my friends love spending time with their partners, sometimes being the third wheel is a drag, and I want to stomp my foot and demand that my friends ditch their dudes for a minute so I don’t feel like such a loser.

And it’s not all about me. I’ve gotta say, I’ve noticed that some of my acquaintances have been avoiding me since I became single. I’m not being vain when I say that my single status could be threatening to women in relationships. I was married for a long time. I know that a single, available woman creates tension. Unless I’m dealing with a dear friend, I’m not about to lead with, “Hey, my marriage ended because my ex cheated on me, so we’re all good here…”

On top of that, my friends in relationships either want to hook me up, or want to hear about the mythology of my sexual adventures. I get that; when I was married, I treated single friends like they were magical unicorns. I wanted to hear every sordid detail of their dating lives. Now I realize how inconsiderate that can be.

Despite those few friends who have cut me off since my divorce, the awkwardness of being a third wheel is mostly in my head. After two years of third-wheeling it, I reached out for professional guidance. It turns out, love experts are just as good at sorting out the lives of single people as they are at working on relationships.

Here’s the plain truth I discovered: It’s up to us to figure out how to manage friendships, and focus on people who enrich our lives. Being single doesn’t prohibit us from having coupled friends, but it does take some extra work to maintain those friendships.

Two strategies: The first is to put your foot down and arrange to hang out with your good friends one-on-one. Don’t beat around the bush. “Your best bet is to tell your friend that you miss time with just her,” says Tina B. Tessina, PhD, psychotherapist and author of The Ten Smartest Decisions a Woman Can Make After Forty. “Having another person around changes the relationship and the interaction.” It helps if your friend’s partner knows you and doesn’t feel threatened by you, so be willing to at least spend a little bit of time with the two of them as a couple before you politely ditch the spouse.

What if your friend presses? It’s alright to be honest about your feelings, even if you’re feeling jealous that they’re coupled up and you’re not. “But, be prepared for them to match you up with all kinds of single [friends],” says Tessina. “They don’t want you to be jealous, so their idea of what to do about it is to find you a match.”

I’m at the point where I’d welcome some matchmaking, but that isn’t for everyone. Tessina recommends that you avoid complaining about being single if you don’t want your friends to try to fix it for you. I’m hoping the opposite holds true. If I complain more, will my single friends toss their single friends my way?

Strategy #2: Consider adjusting your own attitude about hanging out as the third wheel.  “If you are looking to meet someone, then a married couple is actually the best company for a single [person],” says Lori Bizzoco, executive editor and founder of CupidsPulse.com. “Don’t think of yourself as a third wheel; instead, take advantage of the opportunity to go out and possibly meet someone while you are with them.” Groups of single women intimidate men. Men find a single woman with a couple more approachable. Instead of seeing yourself as the awkward third wheel, imagine that you’re flying with a wingman and a wingwoman.

Additionally, it could be time to have a heart-to-heart with your friend instead of bottling up your emotions. “Expressing your feelings is an important part of any relationship,” says Bizzoco. “Although you’re friends may only be trying to help you by suggesting that you hang out, it is always better to let them know what it is that makes you feel uncomfortable. Friendships have always been about being honest and open with each other, and that shouldn’t change.”

In my case, I finally had to get over myself and tell my best friend that I felt jealous and weird hanging out with her and her boyfriend. Fortunately, she remembered being the third wheel when I was married and she was the single one. We had a good laugh about it, and it released a lot the tension I’d been holding inside.

There’s no single solution to managing being the third wheel. But know that jealousy and resentment are normal and passing. What matters more is maintaining relationships that enrich your life. You may end up embracing hanging out with couples, or you may carve out more one-on-one time, but either way, don’t lose sight of the value of friendship.

Maria Mora is a freelance writer and editor from St. Petersburg, Florida. She lives with her two sons and two male dogs and often feels entirely outnumbered. When she has kid-free time, you can find her sleeping in as if her life depends on it.

Got stress? Feeling alone? We got you.  Tune in and get ready to sing with survivors, Joly Herman, Christopher Stibbs, and Munchie Herman in this ...