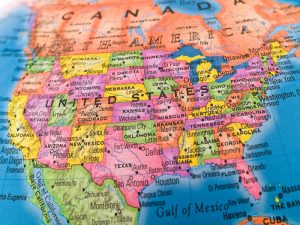 Co-parenting can be difficult enough when both parents live in the same neighborhood, but co-parenting with someone who lives in another state complicates things. A lot. No matter what the reason for the long-distance living arrangements – job relocation, military service or just a desire to live elsewhere – studies show that there can be a lasting emotional impact on the child.

“The parent who is not there is not getting to meet [the child’s] friends and teachers or to see them in extracurricular activities. The child’s life is something the child knows is foreign to the other parent,” Baer says. It is difficult for a child to communicate and foster a relationship with a parent whom he or she does not see often, thus harming the parent-child relationship.

Long distance parenting can work, however. Take Bruce Shafer and his daughter Cheyenne, 17, for example. Cheyenne has always lived in a different state than her father, so she has never known a different situation.

Bruce lived in Phoenix when his childhood friend from Omaha, Jennifer, came to visit. Two months later, Jennifer called to tell Bruce she was pregnant. With little-to-no job prospects in Nebraska, Bruce opted to stay in Arizona and forge ahead with a long-term parenting relationship.

When Cheyenne was very young, Bruce would visit her often and Jennifer would take regular trips to Arizona so Cheyenne could spend time with her paternal grandparents, aunts, uncles and cousins. As she got older, and before she started school, Cheyenne was able to spend several months at a time visiting Bruce and her other family members. Once she started school, she spent summers and holidays in Phoenix. But Bruce and Cheyenne always communicated regularly.

“Being in a different state doesn’t make him less of a parent; it makes him more so because he’s constantly checking up on me,” Cheyenne says. While they don’t talk on the phone more than once or twice a week, they text one another daily (she is, after all, a teenager).

“Our situation works great because Jennifer and I really don’t have arguments about parenting time,” says Bruce. “If we lived in the same state, I could see where things probably could have gotten argumentative with holidays.” But, he says, since Cheyenne is with her mom the majority of the time, losing time with her on the holidays doesn’t seem like such a big deal.

“I’m lucky enough that my mom and dad are a duo team so whenever it comes to me, they work together.”

When Bruce chose to stay in Arizona, he also chose to work as hard as he could to stay connected to his daughter, including spending a lot of time and money traveling, something Baer—and research—suggests is imperative to making long-distance parenting work.

“Wherever the moved-away parent lives, he can’t be self-centered to the degree that he makes the children come to him each time,” says Baer. He adds that the parent must visit the child in his or her own environment several times a year, and not just on a weekend. This allows the parent to get to know the child’s teachers and participate in extracurricular activities, thus tightening the common bond between parent and child.

There does come a time that it’s just not possible for a child to visit an out-of-state parent for a block of time. When a child gets older,especially in the teen years when their social circle becomes increasingly more important, it’s crucial that the parent recognize this and make accommodations.

Insisting upon long visits isn’t typically in the best interest of the parent or the child. “If the parent isn’t going to be flexible [with visits], they could win the battle but lose the war,” says Baer. “They can force it, but that’s going to have implications on how their relationship plays out, forever.”

That said, now that Cheyenne is moving into her senior year of high school, she no longer wants to spend all her school breaks away from her friends. This summer, she and a friend will visit for a few weeks, then Cheyenne will head back to Omaha where she has a part-time job.

Bruce, on the other hand, will make it a point to spend more time visiting Cheyenne on her own turf as she finishes up high school and makes plans for the future.

Flexibility, communication, putting the needs of the child first, are all ingredients for making a long-distance parenting relationship work. The custodial parent should try to put aside contention and foster the connection between the child and the far-away parent. The long-distance parent can make a tremendous difference in a kid’s life by showing true interest and providing him or her with the consistent love and availability that is crucial for a child’s well being. Skype, Facetime, email, texts and good old fashioned phone calls are tools that can make a real difference in a child’s life.

How Martial Arts Made Me a Better Parent There were three years when I was in the desert. By desert, I mean raising my kid ...