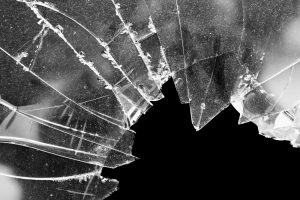 I don’t think I realized the full scope of being a solo mother until I tried to heave a 5-gallon water bottle — aka, the Heavy Bottle from Hell — atop its throne. You know, the one where you have to be an Olympian just to lift the bottle off the floor, much less place it on top of the cooler without spilling a drop — or a gallon, as the case may be.

It was pre-dawn on a cloudy morning when my 9-month old woke up and was ready to start her day. Bleary-eyed, I trudged to the kitchen to make her formula — I breast-fed for the first eight months, so don’t judge — and after I added the powder to the bottle, I turned to see that there, looming before me, taunting me in its ironic, unforgiving way, was an empty gigantic water bottle on the cooler.  Son of a b*tch.

I lugged the last one into the kitchen.  And right before I tried to turn it over, it slipped out of my hands and crashed to the floor. Bawling and sitting in a 5- gallon-puddle of water in my kitchen, I realized I was not only weak, but I was alone.

It was so clear. There was no longer a husband to assist with the heavy lifting. I needed to get myself together or, God forbid, I’d be drinking tap water for the rest of my life. And more importantly, that meant polluted baby formula.

First thing’s first. Baby’s hungry, I’m out of bottles, and I need a new one STAT. I called the company, hoping they’d come to my pity-party and send a free 5-gallon bottle right away. Perhaps the customer service rep would even drive one over herself.

Well, surprise, not only did the honey-voiced rep agree to attend my party, she also decided to bring me a gift. “Why don’t you order our spill-proof cap?” she suggested. I choked. YOUR WHAT? Apparently, for five bucks, I could buy a spill proof, pressure-controlled cap that I could use to keep  water from seeping out until it’s upside down on the cooler. I nearly fainted. Then she said “We’ll drop it by tomorrow. If you’re not home, we’ll just leave it.”

And that’s when my epiphany hit.

Everything is going to be okay. Problems only exist to help us find our way to solutions.

Sometimes we have to be available enough to let someone help us.

All I had to do was pick up the phone and ask. Ask, and the spill-proof cap shall come.

Episode 12: The Do’s and Don’ts of Being a Good Step Parent