In Defense of Dads 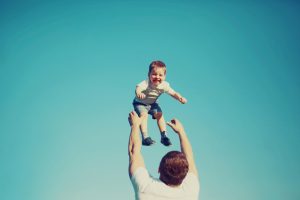 I spend my life advocating for and working with Single Moms, but I have a few choice words to say in defense of dads, because I am sick and tired of watching them be disenfranchised—by our society, and worse by their exes.

I am sick and tired of dads being seen as half the parents their counterparts are.

I am sick and tired of dads being treated as if they’re stupid.

I am sick and tired of dads being treated as if their relationship with their kids isn’t just as important as a mom’s.

Sure, there are deadbeat dads out there, and to those, I give a giant “F*^k you”—as I give any parent, male or female, who doesn’t fully understand the weight and value of the job at hand.

But those aren’t the dads I’m defending. The dads I’m defending are all the rest—the majority, in fact: those who see their kids 50% of the time, or more. Those for whom every breath is taken so as to care for their children— who eat, sleep and breathe fatherhood.

Is it so crazy to believe that a father could have such an attachment to his kids? Because we, as mothers, grew this child in our bodies, do we actually have more “attachment rights” than a dad? That would be like saying that an adoptive mother has less of an attachment to her children than a birth mother, and I know a few adoptive moms (and dads) who’d string you up by your most sensitive body parts for even thinking that.

When my ex-husband goes to the pediatrician with either of his boys, the nurses will often say, “Do you want to ask mom about his last shots?” To which he replies, “I know exactly when his last shots were. And this little one? I have full custody of him. I got this.” It infuriates him, and rightfully so.

That he has to defend himself as a full-fledged parent against the assumptions of pediatric nursing staff (and often the doctors too) is emblematic of how deeply rooted this problem is.

Sure, there was a learning curve for my ex, as there is for many dads. I was a stay-at-home-mom who took care of all the big stuff because that was my job. But when that job was vacated, he had to step up—and I gave him all the support and space to do that. I didn’t micromanage him from a distance—not because I’m some kind of Zen saint, but really because I was so over doing that job fulltime, and I knew that if we were actually going to do this parenting thing 50/50, I wanted it to really be 50/50.

When my ex would call in a panic because there was a birthday party on “his” weekend, I’d say, “I’m sure you can figure it out. Text the mom and see what the kid likes.” And you know what? He figured it out. Now? He’s way more organized and on top of shit than I can ever hope to be. When my son is in his care, I am 100% confident that he is well taken care of, growing and learning. Because he’s with his father.

While my ex is an awesome dad in just about every way, I am also clear that I empowered him to be so—just as he has empowered me to be a great mom. I took my hands off and allowed him to find his way when at first it felt confusing and scary to do so. And he succeeded, because he’s not an idiot. At first he may have beeninexperienced in some of the “taking care of shit” stuff, but because he’s a smart and competent man, he figured it out.

There are dads out there who share custody with moms who have always worked, and the parenting fell equally on both sets of shoulders during the marriage. Yet why do these moms, in divorce, suddenly think these dads have no parental rights or abilities? It baffles my mind to see this in action—strike that. It enrages me.

Does it ever occur to anyone that the Disneyland Dad is so named because that’s all we allow him to be? Dads are labeled the “fun ones,” while we are the “responsible ones.” But that’s not genetics; it’s simply what we’ve enabled one another to be.

So what if we decided, as a culture, to give dads their full rights as parents? Might they actually start accepting that responsibility more often?

What if the cultural shift of eradicating deadbeat dads actually starts with how we, as a society, treat the dads among us? What if dads started to stick around more because they actually saw their value—because we showed it to them?

Remember when you were a new mom and they sent you home from the hospital with this tiny infant and you thought, “There’s gotta be some mistake; they can’t let me out with this thing”?

But they did. And you figured it out.

What would happen if you gave that much latitude to your co-parent right now? He just might turn out to be the greatest partner you ever had in doing the most important job either of you will ever have.

Co-Parenting with an Addict: Five Things You Heard as a Kid Can Help You Cope

When I was two years old, while standing in line at a grocery store, my grandfather—the man who helped raise me—heard me shout out to ...