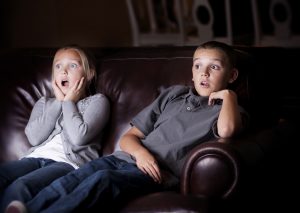 About a week ago, we watched a movie. It was a Wednesday night, my regular night with my daughter, and after she’d done her homework, and her chores, after we’d completed the rituals that are more or less the same in this house and her mother’s, Virginia and I sat down on the couch to begin the process that usually involves a certain quiet tug-of-war between my tastes (“How ‘bout “Sullivan’s Travels”, V? Too black-and-white? OK, why not “Groundhog Day”? You like Bill Murray? No?”) and hers (“You wanna watch this episode of “Once Upon a Time” with me, Dad? “Divergent”?) before we settle on something in the middle. (Translation: I cave.) But this time around I reached out to pick up a screener and move it away from the DVD player when Virginia spotted it.

Virginia is a fairly sophisticated fifth-grader, as it happens, but she’s also the youngest girl in her class, where I’m guessing the movie had been discussed. I’d done a little research into it also —I hadn’t yet watched it— and so could venture at least an educated guess as to what the film’s R rating portended: drugs, language, language, language, and, presumably, what euphemistically tends to be called ‘mature situations.’ I knew there wasn’t much nudity in it, nor violence; I also knew that the possible titillation value of whatever was in it might’ve been exactly why it was such a hot ticket at school.

I also knew, most importantly, that my ex has a certain policy in place in her home. No R- rated movies —and really, not many PG-13 ones— ever. She’s a wise and sensible parent, and would rather err on the side of caution than be sorry. (She’s also not particularly —or at all— prude, or draconian. The spirit of her household is not rigid, cold, or prohibitive.) We disagree about things, as all exes do, and so the questions that floated through my mind as I held the DVD and considered it were multiple: Am I going to hear about this —assuming we do watch it— from her? (Yes.) Am I more inclined to watch it, for some passive-aggressive reason, knowing it will piss my ex off? (Possibly.) Assuming the mature themes aren’t too much for Virginia, is this better for her mind and soul than another episode of “Dance Moms”? (Oh, hell yes.)

It could be argued that the last of these questions is by far the most important one, and I think that’s true, but nevertheless the other two matter. The worst possible thing I could do for my daughter is to plant the seeds of some very destructive thinking. That her father’s house might be “cool” (read: permissive) and her mother’s might be otherwise; that the rules are more flexible here —even though, in certain particular cases, they are— than they are at her mother’s; that somehow the differences of taste or cultural opinion between my ex and myself indicate a hostility, a conflict in which she’d need to choose a side. These things are far more important —I believe that they are the most important questions a divorced parent needs to reckon with— than if a work of art will enrich her. The work of art, after all, will still be there in three years, or five years, or ten. Whereas the emotional damage that can result from enlisting a child on either side of a parental battle, even a small skirmish, can last a lifetime.

I’d like to say I made the noble choice in this case of waiting to consult with my ex— but I didn’t. I was eager to see the movie myself, less eager to suffer through another dose of tween programming, and so we watched it. Sure enough, a couple of days later, I heard from her mom. “You know we don’t let her watch R-rated movies! What were you thinking?”

I gave a rational defense of the decision, even sent my ex a number of articles about “Why “Boyhood” Should Not be Rated R” and so on. But the principle had been breached, and it struck me that, well, the still larger question —how do you set the rules of authority? How do you co-parent with somebody whose standards are, simply, different? When you honestly DO disagree with your ex —and we all do— how do you respect their rules while at the same time allowing for the authority of your own, possibly contradictory, ones? In this very real sense, divorce is no cure for the complications of marriage at all, at least not when it comes to parenting. You can’t get out of that contract, the one that says you’re bound to the other, at least not if you don’t want your child to suffer the consequences of living in two separate households with radically different emotional temperatures, radically different rules and boundaries, and radically different images of what it means to grow up and become an adult. All of us, of course, grow up with two temperatures, two sets of rules and two images, whether the parents are divorced or not; the question is simply whether the parents present as friendly or warring nations, so to speak.

Ultimately, I explained to my ex that I’d canvassed other parents that I’d read up until I had at least a reasonable handle on what was going to be in the movie; that I’d talked to Virginia a little bit about it before we watched, warning that if it did, in fact, seem too R-rated– for either one of us– we would turn it off. Sure enough, she calmed a bit. “Will you please just consult me before showing her things like this?

I considered it. But it is ultimately my job to form and question the rules as well; I’m not consulted on every decision in her house —far from it— and so it seems a little much to run my every idea past her for verification. See the movie, I thought. Just see the movie. What I said was, “I think you need to trust my judgement the way I trust yours. We’re in this together, remember.”

Together, separately. Together, even if never again together.

She did see the movie, though, a few days later. And she loved it.

Matthew Specktor is the author of three books, most recently the novel American Dream Machine, which was a New York Times editor’s choice and long-listed for the Folio Prize. His writing has appeared in GQ, The New York Times, Harper’s, and numerous other periodicals.

I Promise to Touch You

If I ever marry again, I’d want my vows to be something like this. I promise that I will always try to see you. That ...