How Martial Arts Made Me a Better Parent 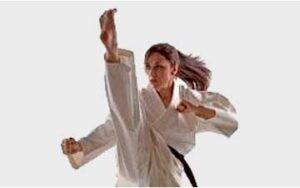 There were three years when I was in the desert. By desert, I mean raising my kid by myself in a town I ended up in after my divorce. I had two friends, I had a job, my kid was in school, I had a car.

Okay, I was making it work. But I was going through a divorce trial to end all divorces. There were calls to the police, calls to child protective services, neighbors called on to come by when I was intimidated.

I had lost a good amount of weight. The anxiety-type of weight loss where if a bowl of 69 cent ramen looked tasty, you’d better seize that moment of appetite and slurp down those noodles.

But I can say that my kid was healthy, active in school, unaware of what was going on in court. Loose lips sink ships.

The town I lived in had a liquor store with a gumball machine. There was a nice Italian restaurant owned by a nice Chinese guy that had good a early bird menu. There was a frozen yogurt store where the teenagers crowded after school. A national bank. A dive bar. And there was a karate studio.

I edged over to the entrance one day, thinking that maybe I wanted to see what was going on. My dog panted in the heat. I saw a squat young man taking punches from a five-year-old. He was serious, but smiling. He showed the boy how to bow. He held up pads for the boy to kick. “I can do that,” I thought. It smelled like feet, but I didn’t walk out. No, it made me set my bar a little higher. I took a flyer and screwed up the courage a couple of days later to call.

The grand master of the studio answered the phone, speaking to me in a clear, kindly voice. He told me I was welcome to come; I could have two private lessons a week and one group session. He offered a gi, a white belt and a package deal. I committed.

That same squat young man– we’ll call him Luke– held the pads for me to punch and kick. He taught me how to build my battle cry, my kiai. He told me it would come from deep inside, because it was important for me to have a strong kiai. I tried it a few times as I kicked the pads. He was as solid as an anvil.

“KIAI!” I kicked the pad so hard that he stepped back.

“That,” he said,”Is a Kiai.” I blushed and continued my lesson.

Bloody knuckles, jammed toes, sore neck, stiff shoulders, nothing about this practice was dainty. But as my kid watched me during the lessons, she saw my resolve. She saw how strong I was becoming. I wasn’t afraid of making mistakes, which is the humility that a white belt must have in order to learn. The grand master told our class he expected integrity from us inside of the dojo and outside. He told us of fights he had survived when he was a green belt, and of audiences all over the world who came to see him, now an elderly man, fight with the quickness and agility of a person younger than my age.

I no longer live in that town, and  I am not taking martial arts right now. But the lessons have gone deep. I am a fighter. I might be afraid, but I will learn. I continue to have integrity inside and out. I will find my spirit yell, and I will yell it. Because there is someone out there, wiser than I am, who will hear it. And we will get stronger.

Steffi Thomas is the name of a freelance writer who lives on the West Coast, who can be seen walking her dog on foggy nights, buying ripe tomatoes at the market, and jotting things down in an unlined notebook.

Raising kids is one thing. Raising a kid to become an adult is another. On this episode of The Solo Parent Podcast, we’re getting some ...