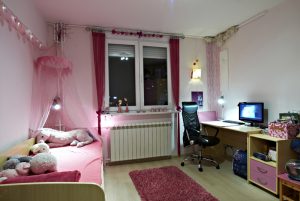 Not very long ago, I moved. Like a lot of single parents —and a lot of single fathers, I suspect, in particular— I found myself house hunting with a mixed motive. What would work for me, of course, but also (of course, of course) what would work for my ten-year-old daughter? Who’s with me only thirty percent of the time, or so —less than half— and so it wasn’t quite an equal decision making process. Her needs go ahead of mine, qualitatively speaking, but in terms of time, there are less of them. Hence, who gets the bedroom with the bigger closet (embarrassingly, and thanks to an indulgent grandparent, she may own more clothes than I do); who gets the adjacent bathroom, and who gets the one down the hall, and so on? Once we resolved these issues —and we resolved them the way we always do, with me caving in to ninety-five percent of her preferences and she graciously, adorably, conceding thirty percent of them back to me, because my daughter is an incredibly loving kid who seems to like to humor her dad— I was confronted with the same thing I always am.

Thirty percent of the time is . . . not very much. It’s two nights a week and half of every weekend. Which means that her new, glowingly-appointed room with its signed Jennifer Lawrence poster and its electric keyboard, its beanbag chair and its groovy, tween-dream furniture is empty most of the time. Every morning I walk by it. And every morning (or five mornings a week, at least) I peek inside and I take in its emptiness with, well, a heavy heart. My ex and I split almost eight years ago now. V was not even two years old, and though we’ve done a better-than-merely-amicable job of raising her so far, the truth is, there has never been a time since her infancy in which I got to see my daughter every day, and there has not been a day —in fact, there has not been an hour— in which I am not, at some level of my awareness, sad about this fact. Deeply so.

If my own parents’ divorce, which happened when I was thirteen, was the defining event of my adolescence and early adulthood, then being separated and then split from V’s mother is the defining event, at least to date, of my life. There is nothing and no one who matters more to me than my daughter, and no moment in which this is not true.

Of course it is also true that I enjoy my (partial) freedom immensely. F. Scott Fitzgerald, who knew a few things about living it up —and also, if you read his occasional letters to his own daughter, a few things about being a wise and loving parent— remarked that “the test of a first-rate intelligence is the ability to hold two opposing ideas in mind at the same time and still retain the ability to function.” Which is to say, just because I miss my daughter with a force that is almost paralyzing seventy percent of the time, I also revel in my free —or free-ish— time. I love getting out of bed and running to the gym, for instance, rather than to the kitchen to make her lunch; love not worrying if there are groceries in the house (since who cares if I starve?); love staying up to write this article, since I can sleep the extra half-hour tomorrow morning anyway, and love —yeah, I’ll admit it— the freedom it offers in my social and in my dating life as well. Is it a good idea to stay out a little later, to order that second (or, if I’m in a mood, third, even) glass of wine? Whether or not it is, the disciplines of being a parent are a little more flexible when I don’t have to obey them all the time, and so I don’t. Obey them all the time, that is.

Is it worth it? No. God, no. The melancholy, the regret —which will last longer than a mild hangover— the sadness. These things won’t go away. The best I can do is argue them to a standstill, remind myself that I am an adoring and attentive parent raising what seems to me an unusually happy child (I think back on my own ten-year-old self and wonder, what was wrong with me? Or is V just strangely predisposed to joy?), that she is loved from all sides and that no situation in which my ex and I were still together could possibly have worked out better for her anyway. All this is true, and still I am sad.

Do all divorced parents feel this way? (I dated a woman once whose ex lived, voluntarily, in San Diego, who had every opportunity to take an equal-or-better- paying job closer to home and yet who opted not to, for whatever reason— but I find this hard to believe.) Doesn’t everybody miss their child to an extent that’s almost intolerable when the child is away? And —doesn’t every parent also kind of enjoy those moments when they’re free and clear? Don’t they? Parenting is hard work, so how could you not?

Do I contradict myself? Very well, then I contradict myself. So said Walt Whitman, whose Song of Himself could not possibly have been written —or, at least, could not possibly have maintained its relentless self-focus if it had been written— by a parent. Still, it’s true. I do, and everybody does. And as Whitman is a poet of immense and infinite joy, a writer who gives form to delight better than anybody, I can’t for the life of me imagine he ever experienced any pleasure as acute as the one I feel when, after the usual absence of two or three days, I get out of bed and walk, almost nonchalantly, down the hall. Then stop, and back up, and take a look– as if to be sure– to remind myself of my incredible good fortune. Here she is, after all: in our  home, where she (also) belongs, and makes me feel like I do too.

Matthew Specktor is the author of three books, most recently the novel American Dream Machine, which was a New York Times editor’s choice and long-listed for the Folio Prize. His writing has appeared in GQ, The New York Times, Harper’s, and numerous other periodicals.

Why Father’s Day Is So Important For Daughters

For nearly three weeks I’ve been facilitating The Father Project for some sixty-plus women. The project is designed to assist participants in healing whatever emotional ...