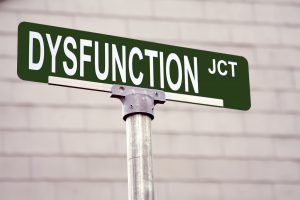 There’s no class in high school on how to not be a shitty boyfriend or girlfriend. Sure, they teach us the biology of sex, the legality of marriage, and maybe we read a few obscure love stories from the 19th century on how not to be. But when it comes down to actually handling the nitty-gritty of relationships, we’re given no pointers… or worse, we’re given advice columns in women’s magazines.

Yes, it’s trial-and-error from the get-go. And if you’re like most people, it’s been mostly error.

But part of the problem is that many unhealthy relationship habits are baked into our culture. We worship romantic love — you know, that dizzying and irrational romantic love that somehow finds breaking china plates on the wall in a fit of tears somewhat endearing — and scoff at practicality or unconventional sexualities. Men and women are raised to objectify each other and to objectify their relationships. Thus, our partners are often seen as assets rather than someone to share mutual emotional support.

A lot of the self-help literature out there isn’t helpful either (no, men and women are not from different planets, you over-generalizing prick). And for most of us, mom and dad surely weren’t the best examples either.

Fortunately, there’s been a lot of psychological research into healthy and happy relationships the past few decades and there are some general principles that keep popping up consistently that most people are unaware of or don’t follow. In fact, some of these principles actually go against what is traditionally considered “romantic” or normal in a relationship.

Below are six of the most common tendencies in relationships that many couples think are healthy and normal, but are actually toxic and destroying everything you hold dear. Get the tissues ready.

Is: The “keeping score” phenomenon is when someone you’re dating continues to blame you for past mistakes you made in the relationship. If both people in the relationship do this it devolves into what I call “the relationship scorecard,” where it becomes a battle to see who has screwed up the most over the months or years, and therefore who owes the other one more.

You were an asshole at Cynthia’s 28th birthday party back in 2010 and it has proceeded to ruin your life ever since. Why? Because there’s not a week that goes by that you’re not reminded of it. But that’s OK, because that time you caught her sending flirtatious text messages to her co-worker immediately removes her right to get jealous, so it’s kind of even, right?

Why It’s Toxic: The relationship scorecard develops over time because one or both people in a relationship use past wrongdoings in order to try and justify current righteousness. This is a double-whammy of suckage. Not only are you deflecting the current issue itself, but you’re ginning up guilt and bitterness from the past to manipulate your partner into feeling wrong in the present.

If this goes on long enough, both partners eventually spend most of their energy trying to prove that they’re less culpable than the other, rather than solving the current problem. People spend all of their time trying to be less wrong for each other instead of being more right for each other.

What You Should Do Instead: Deal with issues individually unless they are legitimately connected. If someone habitually cheats, then that’s obviously a recurring problem. But the fact that she embarrassed you in 2010 and now she got sad and ignored you today in 2013 have nothing to do with each other, so don’t bring it up.

2. DROPPING “HINTS” AND OTHER PASSIVE-AGGRESSION

What It Is: Instead of stating a desire or thought overtly, your partner tries to nudge you in the right direction of figuring it out yourself. Instead of saying what’s actually upsetting you, you find small and petty ways to piss your partner off so you’ll then feel justified in complaining to them.

Why It’s Toxic: Because it shows that you two are not comfortable communicating openly and clearly with one another. A person has no reason to be passive-aggressive if they feel safe expressing any anger or insecurity within the relationship. A person will never feel a need to drop “hints” if they feel like they won’t be judged or criticized for it.

What You Should Do Instead: State your feelings and desires openly. And make it clear that the other person is not necessarily responsible or obligated to them but that you’d love to have their support. If they love you, they’ll almost always be able to give it.

What It Is: When one person has a simple criticism or complaint and blackmails the other person by threatening the commitment of the relationship as a whole.

For instance, if someone feels like you’ve been cold to them, instead of saying, “I feel like you’re being cold sometimes,” they will say, “I can’t date someone who is cold to me all of the time.”

Why It’s Toxic: It’s emotional blackmail and it creates tons of unnecessary drama. Every minor hiccup in the flow of the relationship results in a perceived commitment crisis. It’s crucial for both people in a relationship to know that negative thoughts and feelings can be communicated safely to one another without it threatening the relationship itself. Otherwise people will suppress their true thoughts and feelings which leads to an environment of distrust and manipulation.

What You Should Do Instead: It’s fine to get upset at your partner or to not like something about them. That’s called being a normal human being. But understand that committing to a person and always liking a person are not the same thing. One can be committed to someone and not like everything about them. One can be eternally devoted to someone yet actually be annoyed or angered by their partner at times. On the contrary, two partners who are capable of communicating feedback and criticism towards one another, only without judgment or blackmail, will strengthen their commitment to one another in the long-run.

4. BLAMING YOUR PARTNER FOR YOUR OWN EMOTIONS

What It Is: Let’s say you’re having a crappy day and your partner isn’t exactly being super sympathetic or supportive at the moment. They’ve been on the phone all day with some people from work. They got distracted when you hugged them. You want to lay around at home together and just watch a movie tonight, but they have plans to go out and see their friends.

So you lash out at them for being so insensitive and callous toward you. You’ve been having a shitty day and they have done nothing about it. Sure, you never asked, but they should just know to make you feel better. They should have gotten off the phone and ditched their plans based on your lousy emotional state.

Why It’s Toxic: Blaming our partners for our emotions is a subtle form of selfishness, and a classic example of the poor maintenance of personal
boundaries. When you set a precedent that your partner is responsible for how you feel at all times (and vice-versa), you will develop codependent tendencies.

Suddenly, they’re not allowed to plan activities without checking with you first. All activities at home — even the mundane ones like reading books or watching TV — must be negotiated and compromised. When someone begins to get upset, all personal desires go out the window because it is now your responsibility to make one another feel better.

The biggest problem of developing these codependent tendencies is that they breed resentment. Sure, if my girlfriend gets mad at me once because she’s had a shitty day and is frustrated and needs attention, that’s understandable. But if it becomes an expectation that my life revolves around her emotional well-being at all times, then I’m soon going to become very bitter and even manipulative towards her feelings and desires.

What You Should Do Instead: Take responsibility for your own emotions and expect your partner to be responsible for theirs. There’s a subtle yet important difference between being supportive of your partner and being obligated to your partner. Any sacrifices should be made as an autonomous choice and not seen as an expectation. As soon as both people in a relationship become culpable for each other’s moods and downswings, it gives them both incentives to hide their true feelings and manipulate one another.

Mark Manson is an author, blogger and entrepreneur. He writes about unconventional life advice, think of it as self-help for people who hate self-help. Find happiness through struggle. Conquer fear through surrender. Have more by owning less. Some people say he’s an idiot. Other people say he saved their life. Read and decide for yourself at www.markmanson.net

Kids get hungry – a lot. Parents have got the task of figuring out what to cook, what to buy, and then doing the actual ...